The College of Food, Agricultural and Natural Resources embraces diversity and inclusion, with a focus on ensuring its students achieve academic success. We are committed to promoting the principles of equal opportunity, affirmative action, and multiculturalism where all individuals are valued, respected, provided the opportunity to flourish, and are unobstructed in their pursuit of excellence. 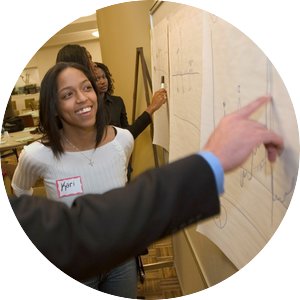 In 2007 we created the Office for Diversity and Inclusion (ODI), which is the only such office in an academic unit at the University of Minnesota. Today, our team implements retention and recruitment efforts of students and faculty from underrepresented communities and assists the college in understanding the importance of intercultural competence in our society and the workplace.

CFANS supports numerous resources and initiatives to advance its diversity and inclusion mission, explore these opportunities below.

More than 40 scholarships totaling $300,000 and significant program support help ensure student success at UMN and CFANS and prepares all for life in our ever-changing, diversifying society. More than 10 programs focus on recruitment, academic success, and building community for undergraduates from traditionally underserved groups. Learn more.

+
Dialogue with the Deans

Dialogue with the Deans

The Dialogue with the Deans series offers an opportunity to come together to reflect on our values as a CFANS community and renew our commitment to actively create a diverse and inclusive environment on the St. Paul campus. These dialogues provide members of the campus community with the opportunity to engage with the deans and other colleagues in learning and conversation about how to make the CFANS and St. Paul communities more responsive and welcoming of various groups. The diversity dialogue is an open exchange, an effort to understand each other’s ideas around diversity and inclusion. The goal of this dialogue is not to necessarily make a decision or reach consensus. Rather, it is to encourage everyone to learn about diversity in CFANS and at the University of Minnesota, explore new issues and build a deeper awareness of the topics in a safe environment. All are welcome.

Dialogues are typically held on Wednesdays, from noon - 1:00 p.m., in Cargill Building Room 105. Check out the CFANS events calendar for the next Dialogue with the Deans. For more information, please contact the Office for Diversity and Inclusion at odicfans@umn.edu.

The St. Paul LGBT Advisory Group is a partnership between the CFANS Office for Diversity and Inclusion and the Gender and Sexuality Center for Queer and Trans Life to raise awareness and build institutional capacity to address key issues in the LGBT community. The group works on initiatives and events that enhance inclusivity on the St. Paul campus. It includes wide representation from the College of Design, College of Continuing Education, Career and Internship Services, Magrath Library and Bailey Hall, as well as CFANS. All faculty, staff and students are welcome to join.

+
Committee on Diversity and Inclusion

Committee on Diversity and Inclusion

The Committee on Diversity and Inclusion is comprised of a group of college personnel with significant experience (or high levels of interest) working in the areas of diversity, multiculturalism and inclusion. We are committed to identifying and implementing a strategic change agenda that encourages the College to reflect the interests, aspirations and cultural richness of our extended community. Learn more.

A partnership between reservation communities of the upper Midwest and the University of Minnesota, this group works to build understanding within the university of the significant role that wild rice (manoomin, Zizania palustris) plays within the communities of the Anishinaabe people of the upper Midwest and Cree of Canada, and the threats to wild rice in the future. To learn more about this symposium, click here.

The Intercultural Development Inventory is a tool that measures one's level of intercultural competence as a developmental skill set. Intercultural competence is the ability to adapt behaviors and shift cultural perspectives across cultural similarities and differences. One core competency our college is that students and employees should possess the ability to work across cultural similarities and differences, and the Intercultural Development Inventory allows for us to measure that outcome. The IDI is used primarily for presentations, staff development, or as a course requirement. However, students, faculty, and/or staff members are encouraged to reach out to our office if they are interested in completing the assessment. Scheduling an individual feedback session with a Qualified Administrator is required in order to receive scores.

For more information, or to complete the assessment, please contact the CFANS Office of Diversity and Inclusion at odicfans@umn.edu. Also feel free to visit the IDI, LLC. website.

+
Teaching Across Difference Community of Practice

Teaching across Difference Community of Practice

The ​Teaching Across Difference (TAD)​ Community of Practice is led by the Office for Diversity and Inclusion in collaboration with the Student Services Office and staff from the Center for Educational Innovation. This program provides workshops and other resources to assist faculty to actively engage topics of diversity and inclusive pedagogy in their teaching. The resources available on the TAD Canvas site support teaching and learning that incorporate explicit exploration of intercultural content, diverse perspectives, and self-awareness. Learn more.

The Office for Diversity and Inclusion provides diversity and social justice workshops and trainings that seek to educate our campus community about equity and pluralism as it relates to the experiences of marginalized populations. These workshops aim to highlight differences that matter in the context of gaining access to historically exclusive spaces. The goal is to create a baseline of expectations that allow for members of our community to show up and feel valued, respected, able to flourish, and are unobstructed in their pursuit of excellence. ODI will work with faculty to tailor workshops to their needs. Check the University of Minnesota's Office of Equity and Diversity for central education and training opportunities.

The Office for Diversity and Inclusion offers individualized consultation tailored to the needs of the faculty. Faculty have sought assistance in a variety of areas including but not limited to intercultural communications in the classroom/lab; finding community based expert guest speakers and resources; managing diversity-related conflict in the classroom/lab; and creating inclusive classroom/lab environments. Please email odicfans@umn.edu to make a request.

Tucked between Cleveland and Larpenteur avenues on the St. Paul campus lie the little-known Native American medicine garden. Run by Native caretakers in the Native American tradition, these gardens represent hope for a sustainable food system and the healing of Native peoples whose health and traditions have been devastated by the loss of their ancestral environments. Visitors to the Gardens are free to take edible and medicinal plants for personal use, with the intention that they reflect upon the true sources of their own food and the importance of food sovereignty.

Food sovereignty, a central principle behind the garden, is the ability of an individual or community to sustain itself on its own land as Native American nations did before settlers converted much of it for agriculture. Even after some of the land was returned to the tribe, the unfamiliar new ecosystem and lack of agricultural tradition forced them into dependence upon outside food, which today consists primarily of inexpensive processed meals supplemented by D-grade commodities guaranteed by a nineteenth-century treaty with the U.S. government. Grief over this loss of lifestyle and the resulting health crisis runs high, and gardens like these are part of a movement toward the return of a healthier community and a healthier environment. As Gardens Director Francis Bettelyoun expresses, “The Gardens are part of healing ourselves and Mother Earth.”

The garden's message of food sovereignty not only applies to disadvantaged Native peoples; it also points to the lack of subsistence across Western society. “We all have our handout. We are all part of a welfare system,” says Bettelyoun, referring to a universal dependence upon store bought food, “If that food wasn’t there, what would you do? It’s time to start thinking in that way… We are not a free people; we are dependent upon somebody else feeding us, and we don’t have the ability not to work for food that we could be growing on our own.”

The garden aim to show how people can reclaim responsibility for their own well-being by growing some of their own food in a way that restores the quality of the land. Caretakers plant many of the same perennials that helped Native communities flourish for centuries. They fertilize the soil with rock dust, a powder of finely ground rocks that recharges soil minerals, plus manure and other organic soil amendments, that make the plants more fruitful and nutritious. This style of gardening is highly sustainable as a single application of rock dust can restore nutrients for many seasons to come, while the native perennials will thrive naturally and maintain soil fertility better than other plants.

The garden welcomes all community members to partake by assisting with care taking, attending learning sessions, taking portions of plants for personal use, or simply coming to meditate and enjoy the tranquility of the site.

CFANS offers a series of inclusive events, hosted by several college partners, highlighting the critical role that diversity and inclusion play in enhancing community life and vibrancy, inquiry, teaching and practice, and our ability to drive innovation across all disciplines.

Visit the CFANS News and Events pages to find relevant topics and activities.

For additional information about these programs and more, please contact the Office of Diversity and Inclusion at: odicfans@umn.edu. For faculty and staff resources, please visit the CFANS intranet site. And, for additional information and resources within the university and the greater community, please visit the U of M’s Office for Equity and Diversity.