As Kate Fessler works toward completing a master of science degree in applied plant sciences, she's evaluating a tabletop strawberry system that has been widely adopted in Europe and Canada to determine its feasibility for use in Minnesota. We talked with her about her journey to the College of Food, Agricultural and Natural Resource Sciences (CFANS) and how tabletop strawberries could extend the growing season for the much-loved fruit.

Tell us a little bit about you. How did you end up at CFANS? Why did you become a scientist?

I grew up outside Detroit, Michigan on my family’s small fiber farm. My father instilled a love of plants in me from an early age; however, I didn’t realize that the field of horticulture was a career pathway that existed. When I matriculated to Smith College in Northampton, Massachusetts, I planned to major in art history but eventually realized that my favorite courses were all in ecology. I declared a major in biological sciences and was accepted into a research laboratory where I had the opportunity to work with a brilliant team of scientists on molecular ecology research. At the same time, I spent my summers doing applied horticultural jobs including working as a landscaper, an intern at an urban farm in Detroit, and as a World Wide Opportunities on Organice Farms (WWOOFer) at a small Tibetan Buddhist monastery in Ireland.

After I graduated, I flew off for my Fulbright Fellowship in Finland, where I realized that my passion didn’t lie with laboratory work but with horticulture. When I moved home, I took a position at the Anna Scripps Whitcomb Conservatory in Detroit while I worked on my grad school applications. As soon as I had my first phone call with my advisors, CFANS professors Emily Hoover, PhD, and Neil Anderson, PhD, I knew that the University of Minnesota's Department of Horticultural Science was going to be exactly the right place for me. Horticulture encompasses the art and science of growing nearly all of the directly edible crops that we eat every day, and I love that my department engages with research that forms the basis of such a fundamental part of our everyday lives. I enjoy that I’m constantly learning, problem solving, and doing something new. Horticulturists are also a social bunch, and we have a wonderful community full of scientists, professionals, and students who are passionate about plants. 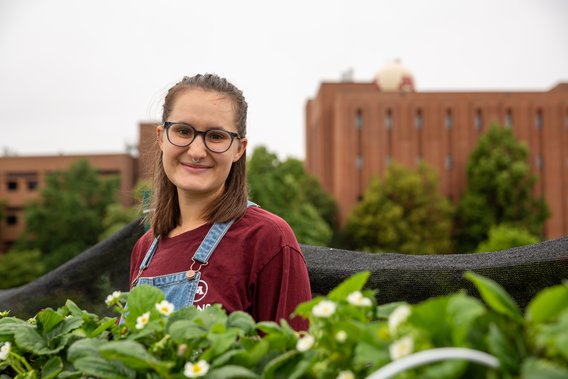 What discoveries have led to your current work?

The basis for my current work began in the 1970s in the Netherlands and Belgium, where hydroponic production was developed and continues to be fine-tuned to this day. Tabletop production refers to growing plants in a soilless media mix at table height, which makes maintenance and harvest much easier and more efficient. We use day-neutral strawberry cultivars, which produce berries year round instead of being finished after only one crop in June. This extends the season and allows growers to offer high quality produce while benefiting from higher off-season prices.

In the Netherlands, most production of this type occurs in huge glass houses, but it is becoming more common to grow tabletop crops outdoors to cut down on initial capital investment. For my research project, we’re growing outdoors because most Minnesota farmers don’t have the resources to construct a high tech greenhouse on their property, but many are interested in new growing technologies and the economic and environmental benefits that they provide. At the University of Minnesota, the strawberries are being grown on the Twin Cities campus in St. Paul next to the Plant Growth Facility on Gortner Avenue.

Why is your research important? What are the possible real world applications?

This research is important for reasons both economic and environmental. Strawberries are the fifth most popular fruit in the U.S. and are in high demand in Minnesota, but the vast majority of U.S. strawberries are grown in California and Florida. This creates both a vulnerability in our local food supply and negative environmental implications because that fruit has to travel so far to reach our grocery stores. Additionally, pests and diseases build up in the strawberry fields of California and Florida, which are fumigated with dangerous chemicals to dis-infest the soil between crops. Many of those chemicals are now banned because they harm workers and the environment, but there aren’t always good alternatives for fields that are in constant production.

The beauty of a system like the tabletops is that it could allow Minnesota farmers to produce high-quality strawberries that use fewer pesticides and virtually no herbicides throughout the season, fulfill demand for locally grown berries, and benefit economically from the higher prices for premium Minnesota produce. There is a learning curve associated with a non-traditional growing technique, but it can be well worth the effort because it is so efficient. 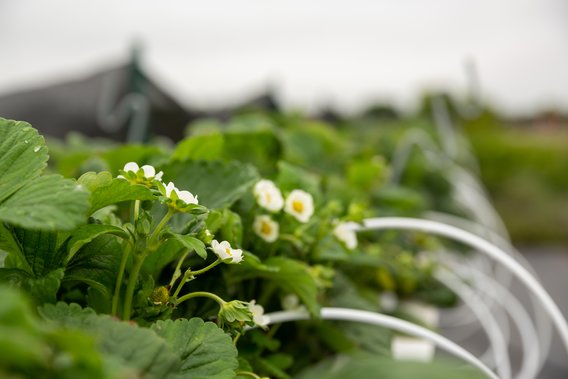 What does sustainable fruit production mean?

Minnesota is primarily a corn, soy, and wheat state. That’s a very important part of the agricultural tradition and culture here that shouldn’t be discounted. However, there is also a lot of demand for locally grown produce and a growing understanding of the environmental implications of monoculture. Horticultural crops like strawberries, tomatoes, or kale provide a well-rounded diet but are more difficult and time-intensive to produce. If you’re growing 10 different varieties of 10 different crops on a 25-acre parcel, that is a huge diversity of both growing needs and of pests and diseases to manage. As horticultural scientists, it is our job to listen to the problems that farmers have and seek new ways to solve those issues. Sustainable fruit production ideally encompasses the practice of preserving local flora and fauna, reducing any negative environmental impacts of farming, and supporting farmers in earning a livelihood. Sustainable is not synonymous with any particular farming technique but is rather a philosophy of using the best practices available to support ecosystem functioning and ensuring that the land can continue to sustain future generations.

What excites you about your work?

I love that my work is both applied and community focused. My research is in service to Minnesotans — both the consumers who want to support their local economy and enjoy delicious fruit and the farmers who want to improve their state’s food system and support their families. The day-to-day work itself is fun and engaging, but the best part is how interested people are in what I do. Putting together educational materials for everyone from commercial farms to master gardeners has been deeply satisfying, and I learn from each conversation that those materials spark. Although I’m not from Minnesota originally, I love living here, and it’s been amazing to feel like I contribute positively to the community.