“I’m very excited about the prospects for this,” Agriculture Commissioner Thom Petersen said at the event 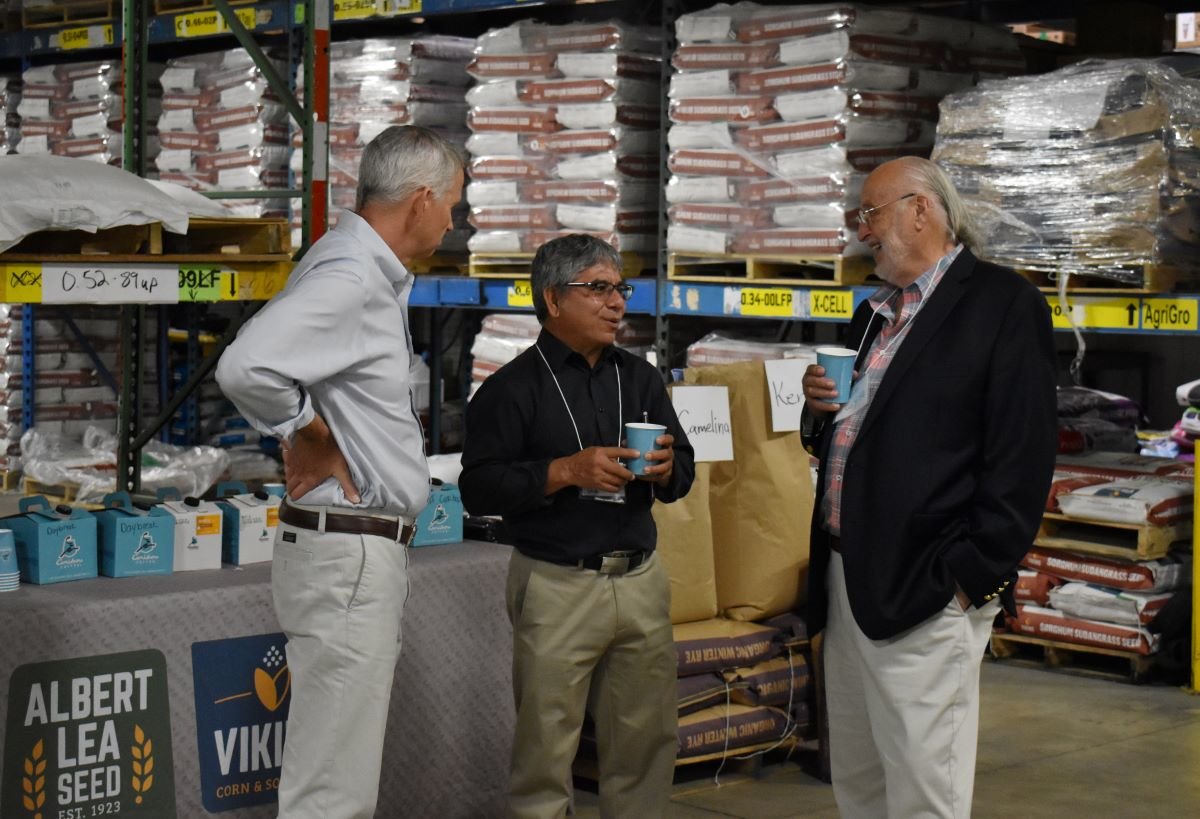 As the agronomist and organic team lead at Albert Lea Seed, Matt Leavitt has a front row seat to purchasing trends. He knows which crops growers are buying, the ones losing their shine and — maybe most importantly — those on the rise.

When the family-run business began distributing that winter hardy oilseed just a few years ago, demand was “essentially zero,” Leavitt said. The 100-year-old seed company moved just 5,000-10,000 pounds of it.

“I think this year it’s going to be upwards of 50,000 plus [pounds] at the end of this season,” he said. “Big growth potential there.”

Leavitt offered up this firsthand account of the skyrocketing demand for winter camelina and other continuous living cover (CLC) crops during a presentation hosted by Albert Lea Seed on July 26. The event, which was attended by state lawmakers and agriculture officials, highlighted the rapid advancement of these crops and the role businesses such as Albert Lea Seed play in getting them to growers.

“I’ve attended the [CLC] field days,” said Minnesota Department of Agriculture Commissioner Thom Petersen at the event. “And I’m very excited about the prospects for this.”

Lawmakers on both sides of the aisle recognize the potential. During the 2022 legislative session they approved an additional $1.26 million in bipartisan, bicameral base funding for both Forever Green research and investments in value chain development to facilitate the growing demand for these crops. Additional funds were also set aside via the Environment & Natural Resources Trust Fund appropriation bill.

Key to the passage was support from Sens. Torrey Westrom (R-Elbow Lake) and Gene Dornink (R-Brownsdale) on the Senate agriculture committee; Reps. Ginny Klevorn (DFL-Plymouth), Samantha Vang (DFL-Brooklyn Center) on the House agriculture committee; and Rep. Peggy Bennett (R-Albert Lea). All five attended the Albert Lea Seed event and took part in a tour of the company’s facility, where CLC crops such as winter camelina and Kernza perennial grain are processed.

The bipartisan enthusiasm is rooted in the economic and environmental potential of CLC crops, which are being developed by the University of Minnesota’s Forever Green Initiative (FGI). The crops consist of perennials and winter annuals that, when integrated into existing crop rotations, provide living cover year-round, as opposed to the three months of the year when corn or soybeans cover the ground. This continuous living cover brings a host of environmental benefits, explained FGI co-founder Dr. Don Wyse, including improved soil health, reduced runoff and less nitrate leaching into groundwater systems.

But unlike current popular cover crops (which Wyse noted are used on about three percent of Minnesota farm acres), there’s a market for these Forever Green cropping systems that “will make it possible for farmers to get that land covered with economic return,” Wyse said.

Or, as he put it later: “Economic opportunity while protecting the landscape.”

That economic opportunity can be seen in the burgeoning food product market for CLC crops such as Kernza, hazelnuts and elderberries. The oilseeds, including winter camelina, are drawing significant corporate interest for their potential in the biofuel and bioplastics industries, and as cover crops.

“It’s cheap,” Leavitt said of winter camelina. “You can seed it at 5-6 pounds to the acre. You can fly it on with an airplane. You can seed it really late and it still overwinters. So there’s a huge benefit, notwithstanding even the oilseed component, that’s going to be really valuable to the ag landscape.”