Since the 1950s, UMN researchers and partners have been growing northern Minnesota’s grass seed industry by investing in research, building a market, and eliminating the pervasive weed quackgrass

In the Roseau and Lake of the Woods region of northern Minnesota, watching the grass grow is anything but boring. Just ask Donald Wyse, PhD, professor and researcher in the Department of Agronomy and Plant Genetics at the University of Minnesota’s College of Food, Agricultural and Natural Resource Sciences (CFANS).

Wyse, an expert in the biology and ecology of invasive weeds, made his first trip to Roseau in 1974 as an associate professor at the University, where he’d accepted a Weed Science and Training position. The Minnesota Crop Improvement Association (MCIA) and the northern Minnesota grass seed industry had lobbied for this role to develop and implement a quackgrass management system that would produce certified “quackgrass free” seed for turf and forage grass species. 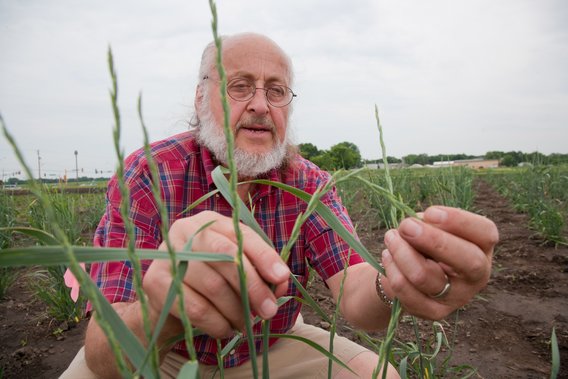 Many Minnesotans may not know that approximately 55,000 acres of grass seed farms are thriving in the northernmost part of our state, where a cooler, wetter microclimate offers favorable growing conditions. These farms contribute $270 million to Minnesota’s rural economy annually. The grass seed industry provides hundreds of jobs in northwest Minnesota and thousands of jobs in the United States through the production and distribution of seed for global turf grass needs, such as lawns, sports fields, golf courses, and parks. The industry has grown exponentially since it began in the region in the 1950s, when the U of M released a variety called ‘Park’ Kentucky bluegrass.

“When I started my career in the mid-70s, quackgrass was endemic throughout Minnesota, and was the primary deterrent to producing high quality grass seed turf in the region,” said Wyse. He noted that quackgrass also was prohibiting the expansion of grass seed production to new turf species like perennial ryegrass, which today — more than four decades later — contributes significantly to the northwestern Minnesota economy. Currently, about 150 growers produce approximately 45,000 acres of perennial ryegrass for seed, due primarily to U of M research in partnership with growers and seed processors in the region.

So just what makes this invader such a particular pain in the grass? Quackgrass is an aggressive, endemic, rhizomes perennial weed that quickly crowds out native species and cultivated crops. Wyse was charged with figuring out how to subdue it, because grass seed that wasn’t certified free of quackgrass could not be sold for sowing purposes, so producers lost money when their seed was rejected.

“Quackgrass reduced the seed yield of turf and forage grasses, but the primary impact was on seed quality, because it was difficult to remove quackgrass seed from the harvested grasses during the combining and seed cleaning process,” said Wyse.

When Wyse began his research, he embarked on a journey of lifelong partnerships, continuing the University’s close work with the MCIA, grass seed producers, and grass seed processors to produce high quality, certified grass seed for the global market. He describes the many people he worked with as a “village” composed of individuals and families from Roseau, Lake of the Woods, and Ramsey Counties. Working together, this village developed effective quackgrass field management systems and what Wyse calls “ingenious seed processing systems” that over time eliminated quackgrass seed in harvested grass seed.

In fall 1974, Wyse initiated a comprehensive quackgrass research program to evaluate how herbicides, tillage, and cropping systems could be used in combination to develop durable and profitable quackgrass management systems. At the time, the newly introduced Roundup herbicide was very expensive, making it cost-prohibitive for producers. Wyse’s project cut the cost of Roundup treatment in half without reducing quackgrass control. “Subsequently, the Roundup label was modified by Monsanto to reflect this discovery, saving grass seed producers and other farmers a lot of money over the years,” said Wyse.

Later, Wyse’s team discovered that herbicides from two new herbicide families could be used to control quackgrass in creeping red fescue, sheep fescue and hard fescue. This opened up the potential to produce these species in the Roseau and Lake of the Woods region, while selectively managing quackgrass.

When this discovery was made, however, none of these fescue species produced seed well in northern Minnesota. Years later, Eric Watkins, PhD, professor in the Department of Horticultural Science in CFANS, capitalized on this development, releasing a new, high-yielding hard fescue variety for production in the region. Watkins’s research covered all aspects of production from establishment to fertility, pest management and residue management to determine the best practices. With a growing number of consumers seeking low input turf, this variety should yield returns for grass seed growers.

The roots of perennial ryegrass 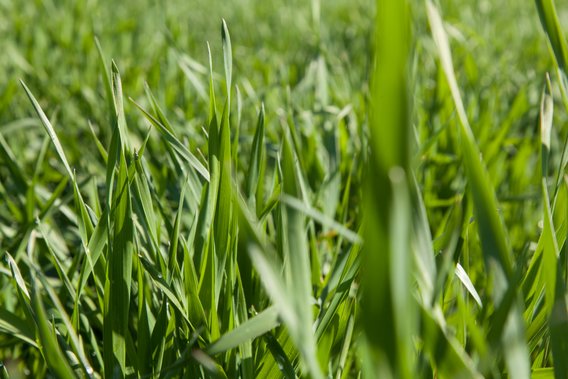 While the demand for high quality turf seed continued to increase, Minnesota’s seed producers were not able to capitalize on the demand for perennial ryegrass turf seed due to quackgrass contamination and the lack of winter hardiness needed for the crop to overwinter and produce seed.

Wyse’s herbicide biochemistry team was first in the world to discover the mode of action of the new herbicide families, providing a quackgrass control solution in the fields. Concurrently, the breeding program initiated a major effort to improve the winter hardiness of perennial ryegrass using new germplasm sources, artificial freezing tests in the greenhouse, and field selection of winter hardy plants with improved turf quality.

The most important outcome of this research was the development of Assure II herbicide-tolerant perennial ryegrass varieties with improved levels of winter hardiness, which launched the perennial ryegrass seed production industry in the early 2000s.

The demand for high quality turf seed has increased dramatically during the last 30 years, explains Ehlke, noting that perennial field crops like Kentucky bluegrass and perennial ryegrass have environmental benefits as well. “They protect the soil from wind and water erosion by maintaining vegetative cover on the soil and limiting tilling operations,” she said. “The fields also provide habitat for wildlife and promote diversity in agricultural practices.”

The introduction of perennial ryegrass for seed production is a success worth celebrating; today it has the largest market share of turf seed produced in the U.S.

A model for Minnesota

Today, the nearly 70-year-old successful grass seed industry in northern Minnesota is viewed by many as a model for the development of similar collaborative programs in other regions of the state. A diverse set of individuals and organizations — including faculty, industry partners, state agencies, and community leaders — are working together to establish this type of program Minnesota-wide through the Forever Green Initiative.

This initiative focuses on the development of 15 new perennial and winter annual crops that can be incorporated into Minnesota’s agriculture system to produce environmental benefits and economic opportunities for farmers and rural communities.

“MCIA, and several grass seed producers and seed processors, have been instrumental in supporting the Forever Green Initiative, and have played key roles in developing Kernza, one of the first Forever Green crops,” said Wyse. “The U of M recently released the MN-Clearwater variety of Kernza, the first perennial grain variety developed in the world and now available for production by Minnesota grain and seed producers.”

The long game pays off

What began with growing Kentucky bluegrass in the 1950s, and thwarting quackgrass in the 1970s, has sprouted into a successful 21st century turf grass seed industry in northern Minnesota, benefitting both the state’s economy and the consumers who enjoy lush lawns, flourishing fairways, beautiful ball fields, and pristine parks. Through research, the U of M and partners have bred new seeds and blocked the path of weeds. Most importantly, they’ve opened new avenues of economic growth for rural Minnesota. The grass really is greener on the other side of science.