Essential oils: exploring a health craze as a pesticide alternative for Minnesota berries

A 2017 report by Driscoll, the California-based seller of fresh strawberries and other berries, named the Twin-Cities "raspberry consumption capital of America." Unfortunately, Minnesota berry growers face a persistent pest — the spotted-wing drosophila (SWD). 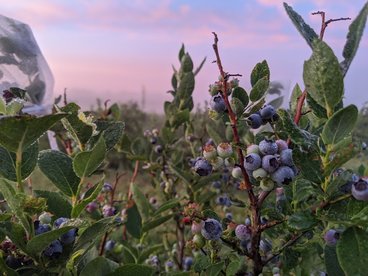 SWD, a small fruit fly that damages berry crops by laying eggs inside the berries, ultimately eats much of the fruit. Traditional management options for this invasive insect are synthetic broad spectrum insecticides, and currently spinosad is the only effective organic insecticide. Both synthetic and organic insecticides are harmful to pollinators and beneficial insects. These pesticides work by entering any insect when it interacts with the berry plants, ultimately breaking down the insect's nervous system until it experiences paralysis and death. Whether an insect is a pest or a pollinator, these pesticides cannot differentiate between the two.

Essential oils, alternatively, are a repellent, rather than a toxin. “To manage [SWD] we usually turn to the spray bottle…but it’s really important to look at non-pesticidal tactics,” Rogers said. Because of their short life cycle, these insects evolve to have increased pesticide resistance in a short span of time. All of these factors make SWD more destructive than any other fruit fly species, and pose a serious economic threat to Minnesota berry crops.

After Bev O’Connor from Blueberry Fields of Stillwater approached Rogers in the fall 2019 with anecdotal evidence that Ecotrol, Sporan, and lavender oil were keeping SWD away from their blueberry plants, Rogers wanted to test this idea. While essential oils are not approved by the FDA, they have gained a cult following in households across the U.S. and are used for a variety of purposes including easing stress, relieving pain, and improving sleep quality. In preliminary lab trials conducted in 2019, fly food treated with essential oils repelled SWD. “One reason that we were so excited to study this further was because of the very strong effect of the essential oils on which food they chose,” said Gullickson. These promising results meant that the study would carry on into a field trial the next summer. 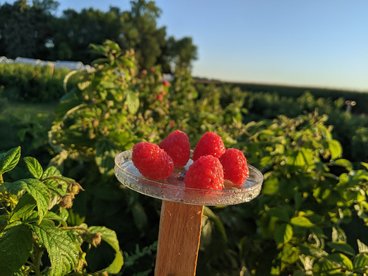 In the 2020 field trial, Rogers and Gullickson treated blueberries and strawberries with Ecotrol, lavender and Sporan. The study applied these essential oil treatments in the same broad spectrum manner as traditional synthetic insecticides, then examined the amount of insects on the plants within 24 hours after application. Ecotrol, an existing product that is a blend of natural insect repellents including rosemary essential oil, was found to be just as effective as other existing commercial insecticides available. “One of the promising results of the field trials was one of the commercial products Ecotrol, which has a few different botanical oils in it, was equally as effective as our best pesticide at preventing infestation,” said Rogers. While essential oils do not eliminate SWD entirely, they do offer farmers protection. “They are particularly effective early and late in the season when SWD populations aren’t at their highest,” Gullickson explained.

The results of this study are promising for Minnesota growers but are not a perfect solution to eliminate SWD.“[Essential Oils] could be one way for producers to decrease the amount of broad spectrum insecticides that they are using and rotating their spinosad broad spectrum insecticides with essential oils. Then it’s not quite as detrimental to pollinators and beneficial insects,” said Gullickson. “We are never getting a 100% [pest suppression] with the best tools, so now the approach is how can we layer tools on top of each other,” explained Rogers. 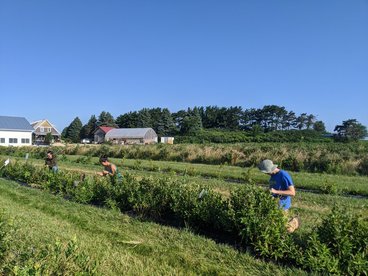 These findings were revealed in August 2020, and Rogers and her team are already looking to expand on their research. Ideas for continuing research include testing the effects of essential oil plants being grown in tandem with berries to repel SWD and other pests, while potentially attracting beneficial insects and pollinators. Berry growers in Minnesota can look to essential oils as one option to use alongside other treatments in preventing SWD and increasing organic options for berry production. “It’s really cool that something a grower directly wanted, we were able to write a grant and help answer that question,” said Gullickson. Researchers like Rogers and Gullickson still have a lot of work to do in developing SWD management strategies, and by connecting with growers and solving real-world problems, they continue our CFANS mission.

This research is a great starting point for examining organic repellents of SWD, but what does it mean for farmers’ pocket books? The Department of Horticultural Science teamed up with the Department of Applied Economics to  analyze economic viability and market outlook with funding from MITPPC. Economist and applied economics research fellow Gigi DiGiacomo worked closely with Rogers and her team to examine the economic implications of SWD and these potential solutions, and you can read more about it in this article from MITPPC.