Not all fire is bad: A short film honors Indigenous ways of knowing | College of Food, Agricultural and Natural Resource Sciences
Skip to main content

Not all fire is bad: A short film honors Indigenous ways of knowing

“My hope with the film is that viewers will more fully appreciate the multi-faceted nature of fire in the places we live, play, and rely on for sustenance. Fire has mediated the relationship between people and land for generations,” Johnson said. “We badly need good fire in our prairies, woodlands, and forests to maintain and enhance our region's fire-adapted biodiversity. Prescribed fire is more than a land management tool, it is part of our caretaking responsibility as inhabitants of Minnesota. Fire restoration is a way to thank the land, and all our non-human relatives, for all they have given us.” 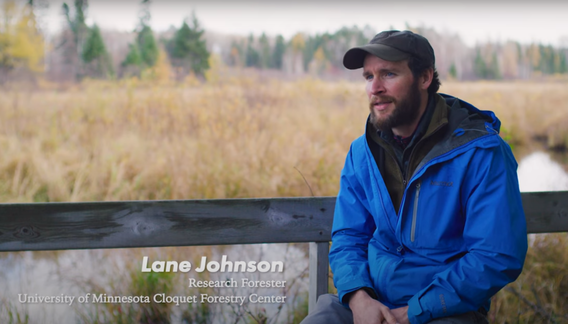 Johnson, a geographer and historical ecologist who studies the fire ecology of the Upper Great Lakes region, assisted Dovetail Partners and Old Saw Media with most aspects of the film’s development. This included overall vision, historical research, film location selection, production logistics, and content refinement. Oshkigin means 'new growth' or 'little shoot' in Anishinaabemowin. The project was a joint effort that included Panek and Northrup as well as Melonee Montano, enrollee of the Red Cliff Band of Lake Superior Chippewa, and Gloria Erickson, who contributed to film development behind the scenes.

“As a tree-ring researcher studying fire history, I've come to know fire as both an ecological and cultural phenomenon,” Johnson said. “Tree-ring records can tell us where and when fires burned in the past, but Indigenous knowledge helps provide the cultural context needed to better interpret the fire record. I have learned so much through my conversations with Damon, Vern, and Melonee. The film is a durable way to share some of their knowledge and perspective with others.”

Featured at the Fresh Coast and Twin Cities Film Festivals this autumn, the film is now widely available as an educational tool that promotes fire awareness and cultural competence. Visit z.umn.edu/oshkigin to watch and share the film.

Not all fire is bad. Increased droughts and longer fire seasons in recent decades have caused more frequent, dangerous, and intense fires across the country. This hits home for many of us living in Minnesota with the wildfires here this summer.

But for thousands of years, Native people used fire to prevent these intense fires, while also using it to cultivate the land, build communities, and preserve natural forests. Current laws preventing controlled burns have changed both the environment of the Upper Midwest and the culture of Native Tribes. Like the fire that rejuvenates the forest, a small group is working to revive this valuable practice.

Oshkigin | Spirit of Fire shows the ways that traditional fire uses can reconnect us with the land and preserve the natural world.