Animal cooperation typically involves sharing crucial resources — and the rules of sharing get complicated, especially when males are involved.

Natural selection theory dictates that males generally compete with each other for food and mates. Thus male cooperation in the animal world is an enigma, especially among unrelated animals.

In a new paper published in Scientific Reports, biologists from the Wildlife Institute of India and the University of Minnesota demonstrated the hows and whys of cooperation among male lions. By studying one of the rarest lion populations in the world — the Asian lions that live as a single population in the Gir Forest of India — researchers found that cooperation among lions does not necessarily indicate that they are related.

“In a 2017 study, we detailed the behavioural nuances of why male lions cooperate: to better protect their territories and have more access to mating opportunities than males who live alone,” said study lead author Stotra Chakrabarti, a postdoctoral research associate in the Department of Fisheries, Wildlife, and Conservation Biology at the University of Minnesota’s College of Food, Agricultural and Natural Resource Sciences (CFANS). “However, a lack of genetic data from the population at this stage had prevented us from determining if such cooperation extended to relatives only, or whether non-kin were included as well.”

Subsequent monitoring of individual lions and collection of tissue, hair and blood samples from known individuals set the stage to find out whether the cooperating males were related or they came together by chance.

“Genetic analyses of the Gir lions were tricky because they have undergone two population bottlenecks that have rendered discerning kin versus non-kin quite challenging,” said Vishnupriya Kolipakam, co-author and faculty at the Wildlife Institute of India.

By synthesizing long-term behavioural and genetic records of known mothers, offspring and siblings, researchers were able to develop a baseline panel against which male coalition partners were compared to understand the level of relatedness between them.

By observing 23 male lions belonging to 10 coalitions, Chakrabarti and co-authors could identify that males who lived in large coalitions (such as trios and quartets) were typically brothers and cousins, but more than 70 percent of pairs consisted of unrelated males. 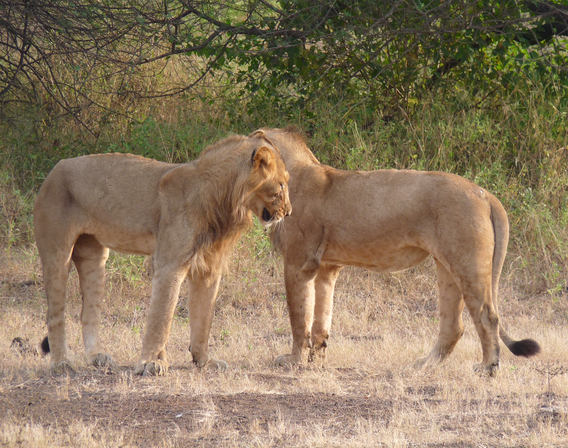 In large coalitions, sharing is costlier because resources are divided between many lions, and often low-ranking partners are excluded from opportunities to breed. Such coalitions are only possible between related animals.

“Forgoing mating opportunities is generally a severe evolutionary cost, unless in doing so you help related individuals,” said Joseph Bump, co-author and associate professor in the Department of Fisheries, Wildlife, and Conservation Biology at CFANS. “As a consequence, this evidence supports a conclusion that large male lion coalitions are feasible only when all partners are brothers and/or cousins.”

Large coalitions fared the best as a group, but the fitness of individual lions — measured by the number of potential offspring sired — was higher in pairs. Such high fitness for individual male lions in pairs allowed even unrelated individuals to team up, because pairs always fared better than single males in terms of territory and mate acquisition.

“The results of our study show that male coalitions prosper better than loners in established lion societies and this can have crucial implications for their conservation, especially when establishing new populations through reintroductions,” said YV Jhala, principal investigator of the Gir lion project and the Dean of the Wildlife Institute of India.

Though large coalitions fared better as a group, they are rare in the Gir system because so few sets of sibling lions grow to maturity. An analysis of 20 years of lion demography data indicates only 12%-13% of the observed lion coalitions in Gir are made of three or four males.

“This calculation of demography and the availability of kin to support cooperation is often missing from studies on animal societies, but it is of fundamental value that enhances our understanding of how optimality in group formation is constrained in the real world,” Jhala said.

The study revealed new details about the behavior of male lions. For example, in a rare observation, researchers determined one of the study’s coalitions could be a father-son duo because they were related and had an age difference of about five years. 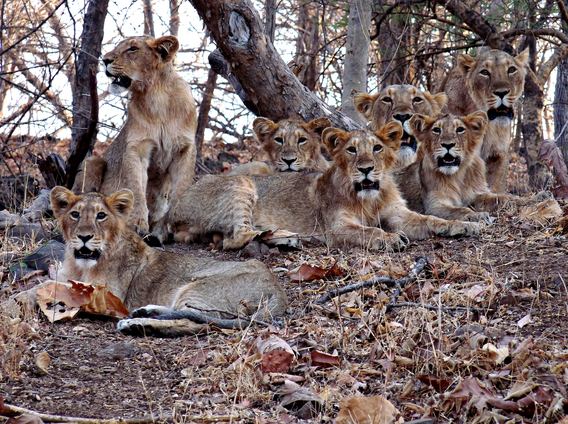 “Such an observation was only possible because we could combine field observations with genetic data, and it shows that there could be multiple pathways for coalition formation in lions,” said Kolipakam.

Researchers also observed that related male partners were no more likely to support each other during fights with rivals than unrelated partners.

“This shows that kin support is not the only reason why males cooperate with each other, but kin support makes the cooperation even more beneficial,” Bump said.

The study indicates that underlying mechanisms facilitating cooperation in lions can be multifaceted.

“We have quantified the ultimate reasons why unrelated males team up, but it would be worthwhile to investigate other aspects of male cooperation, including how their bonds are forged in the first place, how they find compatible partners, what breaks the ice between them when they first meet and how they decide who will lead and who will follow.” Chakrabarti said.

The study was funded by the Department of Science and Technology, India and funds provided by the Wildlife Institute of India and Gujarat Forest Department to YV Jhala.