Behind the research: What the oldest Antarctic ice can tell us about climate change | College of Food, Agricultural and Natural Resource Sciences
Skip to main content

Behind the research: What the oldest Antarctic ice can tell us about climate change 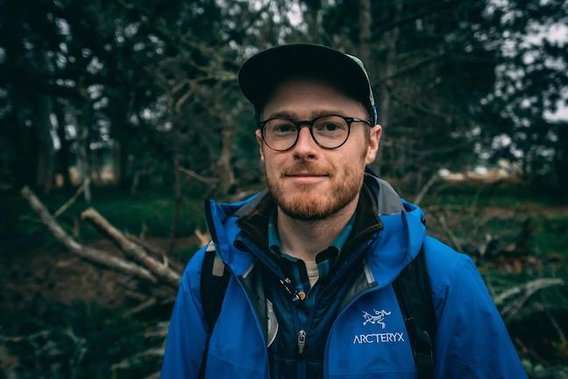 Soil, Water and Climate Assistant Research Professor Peter Neff, PhD, is a glaciologist and climate scientist working to develop glacier ice core records of past climate, environmental conditions, and atmospheric chemistry. He's currently on his way to Antarctica, where he'll be directing multiple field projects for the next three months through the Center for Oldest Ice Exploration, or COLDEX. We talked with Neff about his ongoing work.

Why are you going to Antarctica? What’s the big question your work is addressing?

I’m the director for field research and data for COLDEX, which is a National Science Foundation Science and Technology Center led by Oregon State University in partnership with affiliated researchers, educators, and other experts at 15 different institutions nationwide.

COLDEX is a multi-institution collaboration to explore Antarctica for the oldest possible polar ice samples and analyze those samples to understand the evolution and future of Earth’s climate system.

It will also create and deliver novel educational and professional development programs for teachers, faculty and early career scientists, develop and implement programs to help make polar science more diverse and inclusive, and transfer scientific knowledge to stakeholders and the public.

This season, we have three separate projects and 23 people “deploying” to Antarctica, which will provide us a longer look at the most important "thermostat" on the planet — the amount of carbon dioxide in the atmosphere and the long-lived heat-trapping gas that with a few other key gasses has kept our Earth at a nice habitable temperature lately. As we add more greenhouse gasses, the Earth is warming. COLDEX results will improve our fundamental understanding of the relationship between CO2 and temperature — possibly improving how we represent this process in projections of future warming.

Tell us why old ice matters to people living outside of Antarctica.

Antarctica is the only place on the planet where old samples of the atmosphere are almost perfectly preserved — locked in air bubbles in the ice that started as the air between the fingers of snowflakes. Such a record allows us to directly measure these crucial heat-trapping greenhouse gasses, while simultaneously measuring a very reliable “proxy” for temperature in the ice that encloses this old air. This allows us to track the fundamental heartbeat of Earth’s climate system, the rise and fall of CO2 and the nearly identical rise and fall of global average temperature.

That's a really globally-relevant perspective to have. We know that we can double our time perspective on this by finding a 1.5 million-year-long Antarctic ice core. Our current record is 800,000 years long, but almost doubling that gets us back to some quirky changes in the pace and magnitude of the ice ages, which should help us better understand what led to these natural variations in the timing of cold and warm periods in the past.

Who are you working with to accomplish your research goals?

We get to work with the most fantastic people as part of COLDEX. We are a center with experts  including students, staff, and faculty across 15 U.S. institutions. When we deploy to Antarctica, we get to work with experts at the National Science Foundation, and those in Antarctic logistics at the Antarctic Support Contract which essentially keeps the United States Antarctic Program humming along. These are people from all backgrounds — drivers and mechanics operating heavy equipment, carpenters building science camps, folks administering facilities to keep us safe at the large McMurdo Station, which is home to 1000 or more people during the Antarctic summer. We get to fly with Canadian bush pilots — Kenn Borek Air — and extremely capable U.S. Air Force aviators. It’s fantastic.

On the research side, our shallow ice coring team, led by Princeton University postdoctoral researcher Sarah Shackleton (yes, she’s related to Sir Ernest Henry Shackleton of Antarctic exploration fame), will drill 100 to 200 meters deep at a special site called Allan Hills where >2 million-year-old-ice has been squeezed up near the surface by ice flow. This work has already given us snapshots of what to expect for greenhouse gas levels back 2.7 million years ago. Also at that site, a team led by University of Washington will drive snowmobiles to a nearby location that may provide more old ice and that could allow us to drill 1000 meters deep to recover a 1 million-year-old ice core in coming years. Finally, operating out of South Pole Station at the geographic South Pole, a team led by University of Texas, University of Kansas, and Scripps Institution of Oceanography researchers will fly a grid the size of Washington state, using radar, magnetic, and gravity instruments to see into and to the bottom of the two-mile thick pile of ice that is East Antarctica — trying to find the "needle in the haystack," a goldilocks site where a continuous record of snow and ice from today back 1.5 million years is likely preserved!

How do you and your team tackle field work in an environment that’s known for its ultra cold weather?

The emphasis here is on team! Once our project teams start assembling in New Zealand in early November, they begin to bond as teams, talking openly about expectations and past challenges in hopes of being prepared to tackle the inevitable logistical, environmental, and interpersonal challenges associated with Antarctic fieldwork. We get cozy, extreme-cold weather (ECW) — Antarctica is a land of acronyms — gear loaned out to us, puffy “Big Red” down jackets and Carhartt insulated overalls. The gear is important, but it takes really forming a tight team that leverages everyone’s experience and personal backgrounds to meet science goals in the stressful environment of Antarctica. 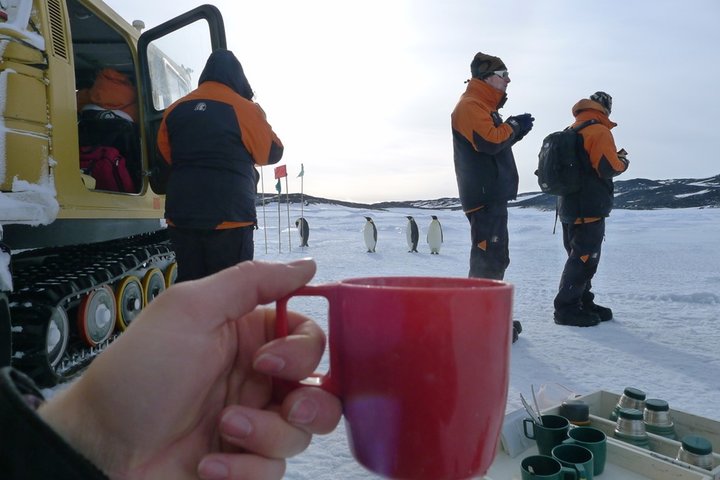 The crew enjoys tea with the local penguins. 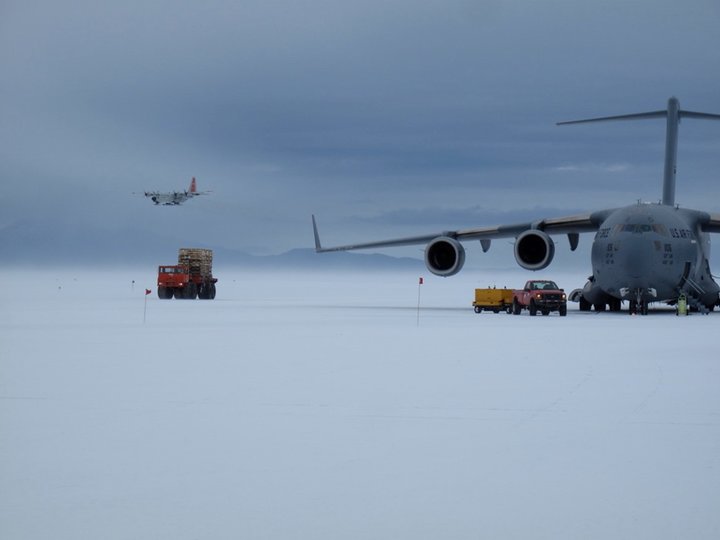 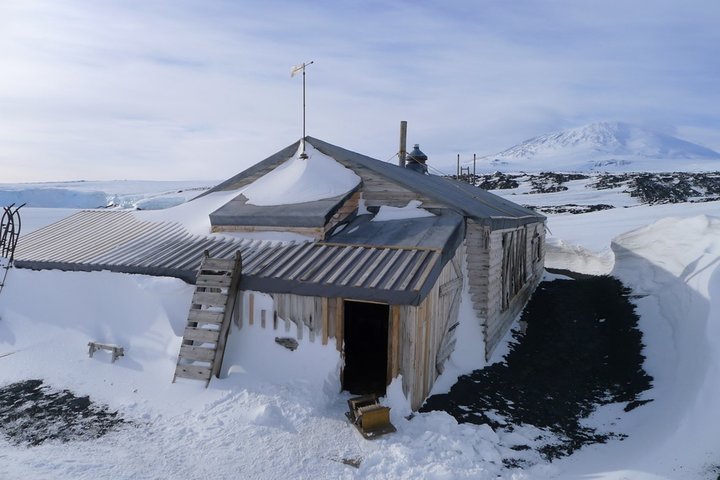 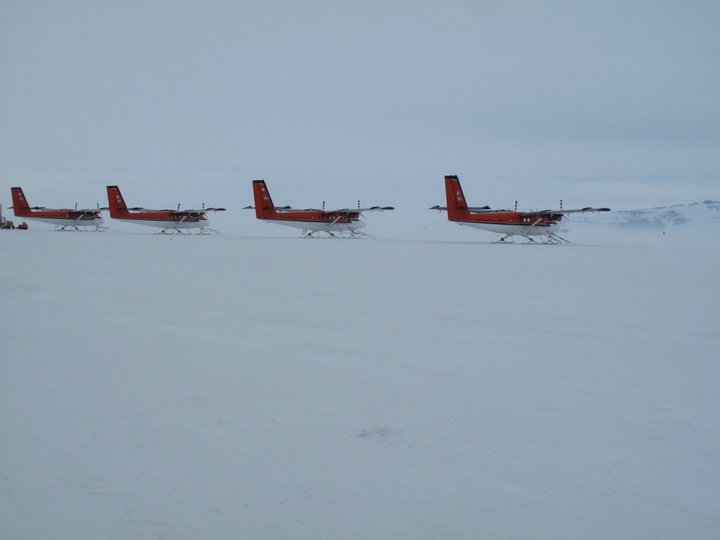 A Kenn Borek Twin Otter aircraft, which will ferry our people and ice cores to and from Allan Hills.

When did you first visit Antarctica? Any favorite memories?

I first went to Antarctica in late 2009 as a masters student at the University of Washington. I was an ice core handler on our deepest U.S. ice core project, processing and shipping ice cores recovered as part of the WAIS Divide ice core project, which ultimately produced a 3,400 meter long and 68,000 year old record of past climate. The best memories are always associated with the unique people you meet in Antarctica, and for me they tend to be a long time-span memory of a whole, challenging season. Days and weeks of cold weather and tedious drilling or analytical processes, that — every time, so far — have led to success at the end of the season and to an incredible sense of group accomplishment. It’s hard to describe that feeling. There are simpler memories, like having tea while being approached by curious Emperor penguins, seeing thick, black volcanic ash layers in ice cores from 2000 meters deep in the West Antarctic ice sheet, and walking through the ghostly Scott’s Hut where the famed British explorer Robert Falcon Scott left for his ill-fated traverse to the geographic South Pole.

What are you hoping to get out of your time there?

I’m hoping to safely and successfully shepherd our COLDEX science teams through their projects, working in concert with the National Science Foundation and Antarctic Support Contract to troubleshoot any challenges that come up. I’ve been to Antarctica four times before, and have spent more than a year there during those trips. I hope I can use my patience, team spirit, and past experiences to help all COLDEX-ers (as we call ourselves) safely meet our ambitious science goals on the ground and in the air!

I also have a fun side project, which is testing the capability of SpaceX’s Starlink satellite internet system. Last summer we hosted a workshop at UMN on the science advances that could be made by bringing high-speed internet to Antarctica — up to and including building a sub-sea cable to Antarctica that would also be an oceanographic observatory. High-speed satellite internet is a likely solution to the “last mile” problem we have in Antarctica. Even if we brought a cable to the coastal McMurdo Station in the South Pole, which produces a lot of data at its telescopes and space physics observatories, deep field science camps couldn’t plug into that. Starlink internet could mean we’ll have faster internet at Allan Hills, Antarctica than I currently have at my house in Saint Paul. Maybe you’ll see us FaceTiming from our ice core camp in between bingeing Netflix shows. More likely, I’ll be able to share a bit more of our experience in Antarctica via social media!

COLDEX is funded by the U.S. NSF Science and Technology Center Program and supported by the NSF Office of Polar Programs through Award number OPP 2019719.