An apple a day…the scientific way

For decades, University of Minnesota apple breeders have been pioneering innovative new varieties to grow a thriving apple market in the state. Get to the core of their groundbreaking, future-focused research.

It is said that apples were the favorite fruit of ancient Greeks and Romans. Minnesotans of today, which scrumptious variety is the apple of your eye?

If you enjoy a Honeycrisp, Haralson, SweeTango®, or First Kiss® apple at your local orchard or farm stand this fall, you can thank the University of Minnesota apple breeding program for putting it there.

Through the development of cold hardy and great tasting apples, the U of M apple breeding program has been sustaining Minnesota’s small but thriving commercial apple industry since the early 1900s. 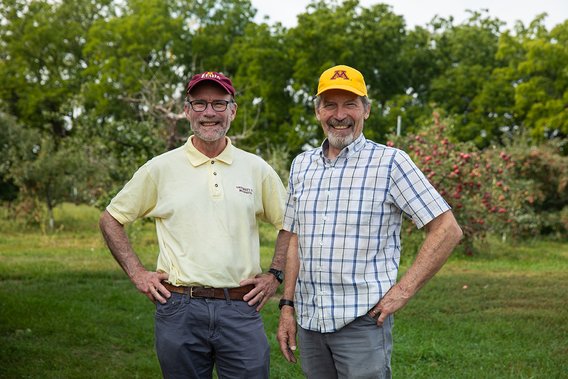 CFANS Professor James Luby, PhD, and Senior Research Fellow David Bedford have led the U of M apple breeding program for the past four decades. During their tenure, the program has gained international acclaim and raised the bar for what consumers consider a good apple.

Developing diamonds in the orchard

The apple breeding program released its first superstar, the Haralson, 100 years ago — and many of the basics of apple breeding haven’t changed since Haralson was developed.

Researchers execute this cross-pollination of the flowers on “parent” apple trees by hand each spring, in much the same way that it occurs in nature.

Once the manual breeding is done, those flowers mature into fruits. Researchers collect the seeds from those apples and grow them into seedlings in a greenhouse. The seedlings are planted out in the test orchards at the U of M’s Horticultural Research Center near the Minnesota Landscape Arboretum and bear fruit four to five years later.

The real evaluation begins when the trees bear fruit. Researchers taste the fruit of each tree — up to 600 apples to taste each day — and decide if each one is worth keeping around or not. Very few of the thousands of apples that get tasted each growing season make it past the first round of tasting; typically only 10 to 12 each year.

The few ‘diamonds’ that are discovered each year are cloned and planted for further evaluation. Eventually, more trees are eliminated and only the best of the best get sent on to the final round of evaluation at research centers in other states and commercial orchards of a select group of committed testers around the country.

The best selections make it through this final round of testing and are released to the public. From initial cross breeding to public release, it takes 20 to 25 years to develop and release an apple variety.

While the basics of apple breeding haven’t changed much over time, Luby, Bedford, and their team have brought advances and efficiencies to the process with the use of horticultural techniques and modern genetics.

“A big change we’ve made in the past decade or so is our use of genetic markers to try to predict which parents will be good combinations,” explains Luby. “We used to do that just by what we call their phenotype, or how they perform, but now we can do it also including their genotype, or the internal genetics that they have.”

These DNA technologies also allow Luby and Bedford to evaluate the genetics of each seedling in the greenhouse. This means seedlings that are predicted to be inferior are now eliminated before they even get out to the orchard.

“Our old system worked for many years, but we always wondered how effective certain genes were for controlling texture or flavor or color,” says Bedford. “Now we understand more about those genes, so we're making much smarter crosses and removing some of those seedlings that are not up to par when they're just two inches tall. We don't have to wait six or more years for the trees to begin bearing fruit before we eliminate the undesirable ones.”

Raising the bar: From Haralson to Honeycrisp

Haralson was considered a great tasting apple in its time and is still grown in Minnesota, but it likely wouldn’t make past Luby and Bedford’s first round of tasting today.

Even with the advances that have been made, only about one in every 10,000 trees produced in the initial breeding is good enough to make it through the entire breeding and evaluation process to be named and commercialized.

"You might wonder why our rate of success is still just one in 10,000? The fact is, the bar keeps going up."

“You might wonder why our rate of success is still just one in 10,000? The fact is, the bar keeps going up,” Bedford says. “Some of the seedlings that we throw away without a second thought today could have been potential winners 25 years ago, but the bar is just much higher now. And the release of the Honeycrisp in the 90s was instrumental in raising that bar.”

Haralson is an exceptionally cold-hardy tree that produces fruit with a firm texture and a complex tart flavor. While that made it a hit in Minnesota for almost 80 years, it lacks a characteristic that consumers have come to expect since Honeycrisp’s release — crispness.

“Before Honeycrisp, we used to describe apple textures in rather general terms. We used the term firm, crisp, and dense all interchangeably. But when Honeycrisp came along, we had to redefine the terms hard, dense, and crisp. Crisp is really quite different from hard and dense,” explains Bedford.

Honeycrisp was a hit with consumers. It very quickly became the most widely grown variety in Minnesota and one of the top varieties in the United States.

The next generation of top-notch apples

Consumers have come to expect all apples to have Honeycrisp’s trademark crispness. And apple breeders around the world have taken notice.

“I think what we're going to see as part of the great legacy of Honeycrisp is that a lot of the new varieties that are now coming out and coming to your supermarket are actually the children of Honeycrisp. It's been used a lot in breeding programs, not only here in the United States, but in Europe and China as well,” Luby comments.

Several apples developed from Honeycrisp’s genetics are already on the market from other apple breeding programs. The U of M’s most recent apple releases, First Kiss® (known as Rave® when grown outside of Minnesota) and Triumph®, are also children of Honeycrisp.

First Kiss®/Rave® has a similar texture to Honeycrisp, but can be harvested almost a month earlier — a win for both consumers and growers. Triumph® carries two forms of genetic resistance to apple scab, making it an appealing option for organic growers.

It’s too early to tell if First Kiss®, Triumph®, or one of the University’s yet-to-be-released apples will surpass Honeycrisp as the top apple variety in Minnesota or rise to Honeycrisp’s level of success. But one thing is certain — the U of M will continue its pioneering of innovative science to fill apple carts, and tantalize taste buds, around the world.