Flora and fauna, where are you going? | College of Food, Agricultural and Natural Resource Sciences
Skip to main content

Flora and fauna, where are you going?

In support of wildlife conservation, the open source book co-authored by U of M’s
John Fieberg, “Species-Habitat Associations: Spatial Data, Predictive Models, and Ecological Insights,” looks at how climate and land-use change
will influence the distribution of plant and animal species

Gray whales (Eschrichtius robustus) currently only reside in the Pacific Ocean, but used to live in the Atlantic Ocean.*

Messy data has met its match in John Fieberg. “I am a quantitative ecologist,” he says. “As such, there is no problem requiring a quantitative solution that is, potentially, not of interest to me.”

As an Associate Professor of Quantitative Ecology in the CFANS Department of Fisheries, Wildlife and Conservation Biology, and a McKnight Presidential Fellow, Fieberg loves helping people make robust statistical inferences out of messy data situations. His research interests are broad, but generally involve applying statistical and mathematical models to problems in ecology and natural resource management.

Much of his recent work has focused on the analysis of wildlife telemetry data (telemetry is the automatic measurement and wireless transmission of data from remote sources), with application to survival, home range, and habitat selection modeling. 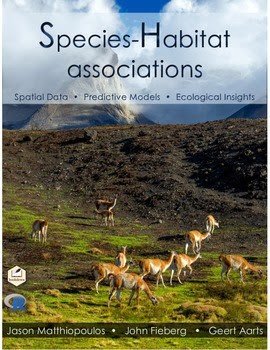 The perils of changing animal habitats

Our globe hosts immense biodiversity, says Fieberg, explaining that most species that exist today have been able to persist for thousands of years because they’ve evolved to take advantage of characteristics of their environment, or they have modified their environment, sometimes through movement, to meet their ecological requirements.

“The current rapid loss and fragmentation of natural habitat, however, can create a misalliance between species and their environment, leading to population decline, and in some cases, extinction,” said Fieberg.

Beyond species conservation, ecological breakdown also has implications for food and health security. According to Fieberg, changes to the environment also can facilitate invasion by non-native species or human-wildlife disease transmissions. “There is an urgent need to define which habitats are most critical to species’ existence and to understand how climate and land-use change affects the distribution and abundance of species,” he said.

The book, which represents the first milestone of a live project that will be continuously updated, describes state-of-the-art SHA models and looks beyond the apparent correlations between the positions of organisms and their local environment.

“This book is of particular interest to graduate students and professionals seeking an introduction to the ecological and statistical literature of SHAs, practitioners seeking to analyze their data on animal movements or species distributions, and quantitative ecologists looking to contribute new methods addressing the limitations of the current incarnations of SHA models,” said Fieberg.

For anyone seeking to understand where species occur, why they are there, and where else they must be, Species-Habitat Associations: Spatial Data, Predictive Models, and Ecological Insights is an essential resource.

Fieberg explains that intuitively, we assume species density tracks habitat quality, and this assumption has been the foundation upon which most species distribution or habitat selection models have been built. The first chapter of the book outlines the many assumptions required for the species-environment correspondence to hold.

“In nature, species are rarely capable of keeping up with environmental change, and such delays can create mismatches between species density and habitat quality,” said Fieberg. These mismatches can create “extinction debts,” whereby species are found in environments that can’t support them in the long term.

In addition, environmental change may also lead to “colonization credits,” whereby habitat preservation or restoration only pays off when the species has had enough time to disperse into these habitats and adapt to the new conditions.

As ecologists, says Fieberg, we need to push the envelope of our existing correlational models to include cornerstone ecological concepts such as the fundamental niche of a species, the ideal free distribution, density dependence, resource depletion, population dynamics, landscapes of fear (maps that describe continuous spatial variation in an animal’s perception of predation risk), and numerous others.

So if you’re seeking expertise on data, animals, and habitats that can help promote wildlife conservation, look no further than Fieberg and his co-authors. They wrote the book on it.

*The gray whale population became locally extinct in the Atlantic Ocean in the early 18th century, at least partially due to commercial whaling. Apart from the historic risks imposed by whaling, the Atlantic likely remains suitable habitat for gray whales. Gray whales are a possible example of colonization credits in place.